Detroit At The Crossroads, Part 2: Chrysler to Learn Italian

Now we know: Chrysler is going into Chapter 11 bankruptcy proceedings, and when the dust clears it's going to be a whole new ballgame. If everything goes as planned (a fairly big if), the UAW will own a majority stake through its retirement plan, Cerberus Capital Management (the current owners) will be wiped out, Chairman Bob Nardelli will be tossed out on the sidewalk, and the company will start offering cars designed by Fiat.

Yes, Fiat. The automaker that ignominiously withdrew from the US market with its tail between its legs twenty-five years ago, the company whose initials were said to stand for "Fix It Again, Tony" (or "Fix It Alla Time"), the company whose Fiat 124 became the basis for the Lada, the Soviet Union's answer to the VW, is going to be the great savior of the New New Chrysler Corporation.

Actually, this isn't as insane as it sounds. For one thing, the Fiat of today is a very different company than the Fiat of 1983\. Led by Sergio Marchionne, an Italian-Canadian who has been obsessed with improving quality, today's Fiat is producing well-designed, well-made cars that are nothing like the temperamental beasts anyone over 40 remembers. Judging today's Fiat by the 1981 Fiat Strada is like judging Ford by the 1981 Escort (an example of which I owned, and which was an indifferently-constructed, flimsy, underpowered, horrid little excuse for an automobile that just loved to warp cylinder heads. But I digress).

There are a couple of potential flies in the ointment, however. One of them is that Chrysler may not emerge from bankruptcy all that quickly, and if so, then it may not survive the process, as the New York Times observed. The other and much bigger potential problem is that Chrysler may decide that it needs to make the Fiat products more palatable to the American consumer by tinkering with the design to "improve" them. According to a Wall Street Journal article quoted in Autoblog, Chrysler's current design chief said as much:

Chrysler's head of design, Ralph Gilles, told dealers that the automaker intends to have its own version of the car, with Fiat providing the chassis and Chrysler designing the exterior.

If there's one thing that the Italian auto industry is good at, it's design. There have been times in the past when the mechanicals underneath were horrendously unreliable, but the sheet metal the mechanicals were wrapped in was so good that they sold anyway. Putting the people who brought us the Dodge Caliber and the current Chrysler Cirrus in the position of redesigning the Fiat 500 or Bravo would be like hiring the old Atari team to redesign the Apple MacBook Air.

I had the occasion last year to have a good look, up close and personal, at a couple of examples of the Fiat 500 here in California that were brought over for evaluation (not the ones depicted below), and let me tell you something: the Fiat 500 is the _cutest_ damn automobile to be produced in 30 years. Park it next to a Mini Cooper, that Anglo-German icon of automotive cuteness and effortless cool, and it makes the Mini look like a cold and humorless rectilinear box of stress. And it performs that feat for about half the money of a Mini. All Fiat has to do is make sure that they're built well enough that they don't spray transmission parts out the back in the first 5000 miles, and they're going to sell like ice cream in August. 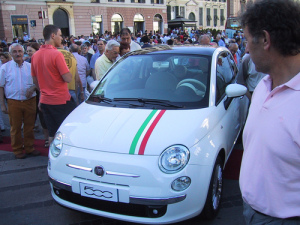 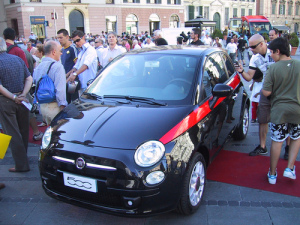 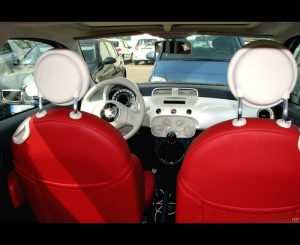 By way of comparison, here are a couple images of the Dodge Caliber: 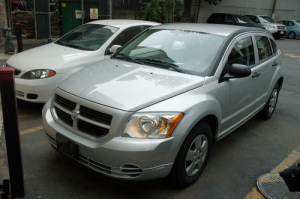 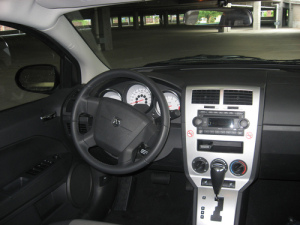 If Chrysler screws this one up, they deserve to go out of business.

Exterior photos of Fiat 500 by Marco Molinari; interior photo by Robertofrom Cagliari, Sardinia, Italy. All photos used under the terms of a Creative Commons Attribution-Noncommercial-No Derivative Works 2.0 Generic licenseand are published here under the same license.