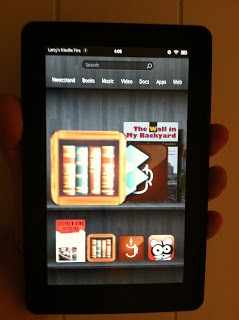 It's been a couple of months now since I got mine, and it seems like a good time to talk about what it's like living with it, and how it's changed my thinking in some ways about e-readers, tablets, and the ways they intersect--and also a good chance to do something with my long-neglected blog.

To start with, I ordered my Kindle Fire (hereafter referred to as "Fire") about thirty seconds after Jeff Bezos finished his keynote at the Kindle product intro last September. Mostly, I was completely blown away by the low price point for what appeared to be a relatively capable Android-based tablet. I was able to further limit the hit to my wallet by using some accumulated points on my Amazon credit card, so my final price was more like $120 than the list price of $199\. How could I resist?

Waiting for it was the hardest part, the longest six weeks I've had in a while. Patience wins in the end, however, and it was delivered to me at my office the day after release. I'd already set up the Personal Hotspot feature on my iPhone, so I was able to connect it to the Internet immediately--or almost immediately, after first downloading the available update to my work computer and transferring it to the Fire via USB. The update went flawlessly, and soon I was connected to the Web and ready to go.

Without going into excessive detail, I will say I was--and am--pleased. The Fire performs about as well as I expected it to. It isn't packing the latest processor, or the most onboard storage, and it isn't based on the most recent version of Android, but it works well enough. Several updates since release have addressed some of the more glaring shortcomings, and the overall feel is now much less jerky than before, with books opening more smoothly and things just generally feeling more together (as an aside, hiding every trace of Android from the user was the right thing for Amazon to do). And the size is perfect, at least for me. The iPad is just a bit big to schlep around everywhere, but the Fire is no bigger than a trade paperback. I like it. In a very short period of time, it has become the one device I would hate to be without, and the one I use more often than any other.

That said, it's not made by Apple, and those expecting an iPad will be disappointed. But for those people, I have just one question…

A little perspective: I bought the first-generation Kindle shortly after it was released for $369\. All it did was read books (OK, it did have a built-in Sprint 3G connection, but you wouldn't want to surf the Web on it. Trust me. I tried…). The Fire, on the other hand, has immediate access to Amazon's Kindle Store, Amazon Instant Video, a damn fine Web browser, email, the Amazon MP3 Store (and all the music I have stored in Amazon Cloud Storage), limited document capabilities, and the ability to run anything that will run in Android 2.3--and yes, you can sideload apps onto it. Is there something you want that Amazon's Appstore won't sell you? Fine. If you can find the .apk file on Google, you can download it to your computer and sideload it via USB on the Fire. Or you can go to m.getjar.com on the Fire and download it directly. Pro tip: make the Dropbox app and a good file browser (like ES File Explorer) the first things you sideload, then anything you stick in your Dropbox folder on your computer becomes instantly available on the Fire.

I'm pretty sure that Amazon didn't intend to build a tablet that runs the Nook app or Aldiko, but the Fire runs both admirably. The Nook app is just for show, mostly; they don't really have anything that Amazon doesn't, but it's nice to have. Aldiko, however…well, more on that later.

So we have here what is essentially an Android tablet at a bargain-basement price. And that is where it gets very, very interesting, and why I have been doing some serious ruminating _(strokes beard thoughtfully…)._

After living with the Fire for a couple of months, here's what I've concluded, and some of it is surprising:

I'm done with E-Ink. Yes, E-Ink is lovely for brightly lighted rooms, outdoors, and long airplane flights. It needs no backlight, uses very little power, and has ridiculously long battery life. But most of my reading isn't done outdoors or on a plane. It's done in my house, in my recliner, for a few hours at a time. Battery life isn't an issue. Neither is overly bright lighting. I don't find my eyes bleeding after a few hours of reading the Fire's LCD screen, and I like not needing a clip-on book light when the ambient lighting is anything below the level of Artificial Sun. And while the Fire is heavier than my Kindle 3, it's no worse than a paper book--and when I get tired of reading, I can flip it to landscape mode and watch _Star Trek: Deep Space Nine._ Or browse Twitter.

Amazon Instant Video is awesome, but not perfect. As an Amazon Prime member, I've been having a lot of fun watching some of my favorite old TV shows and movies for free, but as it turns out, there's one movie that won't play on the Fire for some reason. Unfortunately, it's one of my favorites. If I want to watch it on the Fire, I'm going to have to rip the DVD to my iMac and sideload it. Arrgh.

Amazon is handling magazines on the Fire the wrong way. You can buy magazines on the Fire, but they're basically PDFs of the print version, and you're going to find yourself zooming in and out constantly, which is annoying. It would be better to have magazines in app form, which would make them more usable in this form factor. Case in point: the Kindle version of the Economist on the Fire is almost unusable, but the Economist Android app, which runs fine on the Fire if you sideload it, works brilliantly (you need to be an Economist subscriber for full access).

Amazon is no longer my exclusive (or even preferred) source for e-books. Amazon has a wonderfully extensive e-book catalog, but with Aldiko on my Fire, I can read EPUB books as well. This means I can buy from Google Books, Feedbooks, Smashwords, Books on Board, the Kobo store, even the Nook store…anyplace that sells EPUBs (which is most of the rest of the industry besides Amazon). Amazon is often cheaper, but not always…and there may be cases where a book isn't available in the US, but can be obtained (legally) from an overseas bookstore that sells the EPUB version. And with Dropbox on the Fire, I can have access to my entire EPUB collection anywhere I have an Internet connection, which somewhat mitigates the lack of a Whispersync equivalent (although not completely).

(Now, you may be thinking to yourself, "What about DRM with all those other stores?" Yes, DRM is there. But the Nook app runs on the Fire, Aldiko can handle Adobe DRM, and if you feel diffident about having EPUBs with DRM, you can Google a nice man called Apprentice Alf and he can help you rid your stuff of that particular infection. Not that I recommend that, mind you. Heavens, no. After all, that would be illegal in the US, and I wouldn't want to be responsible for encouraging such a thing. Perish the thought. But if it's legal in your country, or you just don't care, then…)

From now on, I'm archiving all my e-books in EPUB format. I like flexibility. I want to make sure I can read my books years from now, no matter what. Amazon is unlikely to go away, but you never know. Also, I want to be able to read them on any device I have, and as an open standard, EPUB is the most flexible in that regard, and the most likely to be readable years from now. If you think that Amazon's size and market domination mean that its proprietary format will automatically be around in ten years' time and available for whatever platform you're using, try using your iPad to open a document created by Microsoft Works sometime.

I prefer reading on the Fire to reading on the Kindle 3…but I prefer reading in Aldiko to reading Kindle books on the Fire. I've found that to my eyes, the typographic choices made by Aldiko look better than those made by Amazon, and I like its user interface better, including its ingenious method of adjusting screen brightness (if you've used it, you know what I'm talking about).

My next Kindle may not be a Kindle at all. Amazon offers Kindle apps for iOS, Android, Mac, Windows, etc. This means you can read Kindle books on non-Kindle devices. Got an iPad? Got a Samsung Galaxy Tab? You can read your Kindle books on it. This should keep Amazon honest; if they lock down the next generation of the Fire too much, I can go find a 7-inch Android tablet and move on from there. Which leads me to my next point…

Multifunction is better than single-function. I have loved my E-Ink Kindles, but they only do one thing (which they do very well). A tablet, however, does a lot of things, and does them well enough to make up for their shortcomings. Unless I'm about to board a trans-Pacific flight and I need the battery life, I'd rather have something that can do email and Twitter and video in addition to reading. That's just me; your mileage may vary.

Lack of 3G connectivity is a non-issue. At the very least, it's a non-issue if you have a phone to which you can tether the Fire. Tethering to my iPhone 4 is trivially easy, and where I live there's no shortage of places offering free WiFi. Why pay for yet another internet connection?