I didn't exactly see the ghost of Jimmy Adams tonight. But I did feel his presence.

Most of you reading this have no idea who Jimmy Adams was. Well, I'll tell you.

Back in my late twenties and early thirties, I was an habitué of the local music scene. I knew some wonderful people, and had experiences that shaped my life and helped turn me into the man that I am now. One of those people was Jimmy Adams.

Jimmy Adams was a singer/songwriter. He came to Ventura from Texas, running from the law, or so the legend went. The details of that are probably best left to posterity, and to your own imagination. What I can tell you about Jimmy above all else is that he was everybody's friend, so much so that we used to refer to him as the "unofficial mayor of downtown Ventura." Everywhere he went, he knew somebody. If you went to a gig anywhere downtown, you'd see him turn up eventually.

Perhaps uniquely among local musicians, everybody wanted to play with Jimmy. When he booked a gig, mostly at a local coffeehouse called the Café Voltaire, it would be billed as "Jimmy Adams and Friends" because of two things. First, he really would be playing with friends, and second, you never knew who was going to show up. Local musicians, session players from Hollywood, and even folk-rock A-listers like Chris Hillman (The Byrds) or John McEuen (Nitty Gritty Dirty Band). But whoever showed up , you were guaranteed of a good time.

I thought of Jimmy tonight because for the first time in probably fifteen years, I went to hear music at a local club. My nephew, who is turning into one hell of a guitar player, is in a band that booked a gig at a place I used to go to occasionally before I was married (yes, I feel old now).

It was impossible for me to sit there and not think about Jimmy. I half-expected him to show up, greet half a dozen people in the audience, and come up to me saying, "God dang, they're fantastic" in that Texas twang of his. I wish, in a way I have never quite wished before, that Jimmy was still with us to walk up to my nephew and say, "You sounded great." Perhaps there's a little feeling of the torch being passed on my part, but that would have been, as Jimmy would have said, amazing.

This is probably a good place to note that one of Jimmy's signature songs was a tune called "Big Ol' Red Guitar," about a boy who sees a red guitar in the window of a music store and dreams about taking it home and where it will take him, not knowing the hard truth of life in the music business:

He wants that big ol' red guitar
That's in the window behind the bars
And he dreams about the day he'll take her home,
He'll probably pawn it a hundred times
Be involved in a couple of crimes,
He don't know what that guitar's got in store

Yeah, he thinks it'll carry him far
Together they'll become a star
He don't know the heartache and the pain,
He'll probably go through two or three wives,
Ruin a whole bunch of children's lives
He don't know what that guitar's got in store…

This, by the way, is my nephew: 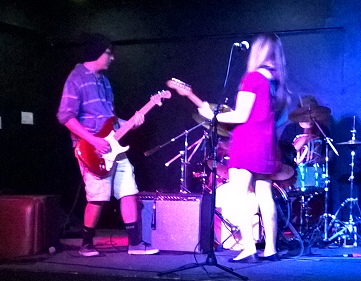 If there's a point to my rambling reminiscence, it's this: When I think of Jimmy, I smile, because he blessed my life and that of so many others, and his presence is still felt in joy. I don't think there's anything better that can be said of anyone after their passing. And dammit, Jimmy, we miss you.