Pocket, you're doing it wrong

Update: Since I originally posted this, Pocket has responded and pushed out a fix for this issue.

I have a friend who is an American Islamic scholar. He's very well-educated, and has impeccable credentials when it comes to the study of Islamic law, including study with the former Grand Mufti of Egypt, Dr. Ali Gomaa, which resulted in his being licensed to issue Islamic legal opinions, known as fatwas. Technically, he's entitled to be called "Sheikh" due to his accomplishments. He lives in Abu Dhabi, and does a lot of work translating Islamic legal texts into English. He also maintains a blog.Today, I saw in my newsreader that he had a new post. Clicking through, I decided to save it to Pocket for later. These are the tags that Pocket suggested: 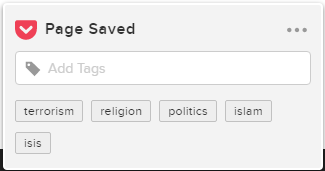 There is absolutely nothing in Musa's post that could remotely be associated with terrorism, except for the fact it deals with the serious study of Islamic law, which SHOULD NOT BE AUTOMATICALLY ASSOCIATED WITH TERRORISM any more than a discussion of Roman Catholic canon law should be associated with IRA terrorism. It's stupid, and it's offensive, and it needs to stop.

Pocket, you are doing it so, so wrong.