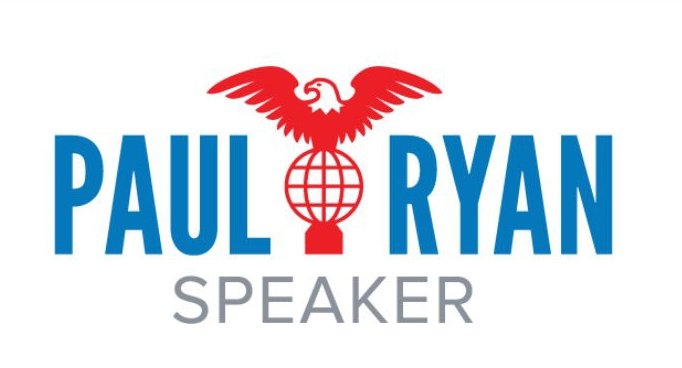 There was a bit of comment today on social media (Twitter in particular) about Paul Ryan's logo (above). Specifically, that it looks a bit like a Reichsadler.

It isn’t, of course. A friend of mine whom I respect a great deal pointed out that it’s basically a simplified version of the official Speaker of the House logo, and it is. As such, it’s silly to focus on it, and we should oppose Ryan for valid reasons, of which the logo is not one.

He is not wrong, and he has a point. My counterpoint to that is that if I were designing a logo, and I were doing it for a public figure, I’d go out of my way to make sure it couldn’t be misconstrued as something it isn’t. I don’t think anyone is opposing Ryan because of his logo, but given his policy positions and image on the other side of the aisle, it shouldn’t be surprising that people see something that wasn’t intended. It’s a “once seen, can’t be unseen” kind of thing.

That being said, I do oppose Ryan for perfectly valid reasons, those reasons being:

…just to name a few.

Basically, I oppose everything that Paul Ryan stands for. I find him contemptible. Like most devotees of Ayn Rand, the writer who popularized cruelty and called it “Objectivism,” he has a remarkably single-minded focus on his ideology, reality be damned. Simply by taking away health insurance from millions, he's going to destroy countless lives in the name of creating a libertarian fantasy world that has never existed anywhere, and it will take us decades to undo the damage he will unleash. We need not ignore a logo to see him clearly for who and what he is.

And now, he’ll be working with a President who appears to be willing to let him have his way. A President who is, in my opinion, as close to being a fascist as anyone who’s ever been elected to the office. A President who has openly associated with white supremacists and has named one, Steve Bannon, as a top advisor. As far as I'm concerned, seeing Nazi iconography where it wasn't intended is, in my view, understandable under the circumstances.