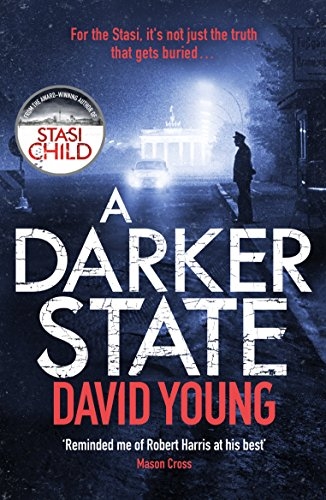 I don't do this a lot, but I have a book recommendation for you.

"A Darker State" is both a thriller and a murder mystery that just happens to take place in East Germany in 1976. Oberleutnant Karin Müller of the East German Kriminalpolizei (Criminal Police) has been promoted to major in order to head up an investigative team with national authority, and is assigned to the case when the body of a teenage boy is found near the East German-Polish border. In the process of investigating, she runs up against the dreaded MfS, the Ministry for State Security, otherwise known as the Stasi, whose interest in the case is mysterious. She must tread carefully when the teenage son of a high-ranking Stasi officer is shown to be involved in unexpected ways, and when the involvement of the Stasi bleeds over into her personal life, it begins to affect her own friends and family, with potential repercussions that can only be described as dire.

The protagonist is interesting, because she is neither a party loyalist nor a dissident. The daughter of a German mother and a Soviet soldier father, who disappeared shortly after her birth, she is a product of the system and still believes in it, but she is not blind to the contradictions in the system, nor to the fact that she plays a part in some things she'd rather not think too hard about. As the series has progressed, she is starting to develop a more complete view of the world she finds herself in, and as the series progresses towards the inevitable end that the reader knows is coming with the fall of the Berlin Wall in 1989, of which she of course has no inkling, it will be fascinating to see how she adapts as the only world she has known starts to collapse. But that's for future volumes.

I'll add one other thing--36 years ago this summer, I visited East Berlin and East Germany. The writing in this series (it's the third book of a planned five) has captured the feel of that time in the East beautifully, both in atmosphere and in details. The author has clearly done his homework. I recommend this book wholeheartedly..

Oh, and if you're in the United States, download this one in e-book form while you can. There is some doubt as to whether this should be sold in the United States yet, as the U.S. publishing rights haven't been sold yet. But somehow, both Amazon and Google will sell it to you--for now.1